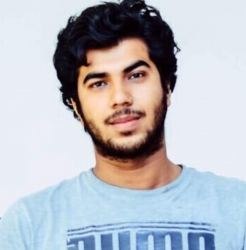 Haissam Khan
Haissam knows his way around a laundry list of expansive open worlds. He has conquered Hyrule, mastered the art of the warrior in Sekiro, and he even delves into the occasional retro RTS RPG now and again. Outside of RPG gaming, Haissam is an anime nut, and keeps up with the manga to stay ahead of the pack.

After The insanely successful universes of Dark Souls and Bloodborne FromSoftware provided an unorthodox take on the Souls genre while still retaining its essence. Set in Sengoku Japan, with a more linear experience than its predecessors, the beautifully crafted world of Sekiro is filled with mythical monsters, deep lore, and secrets waiting to be discovered. Deviating from the slow and methodical combat of Dark Souls to epic fast-paced movements, parries and split-second decisions alongside intricate stealth moments help create a gruelingly wonderful experience for all Souls-loving veterans and newcomers alike. 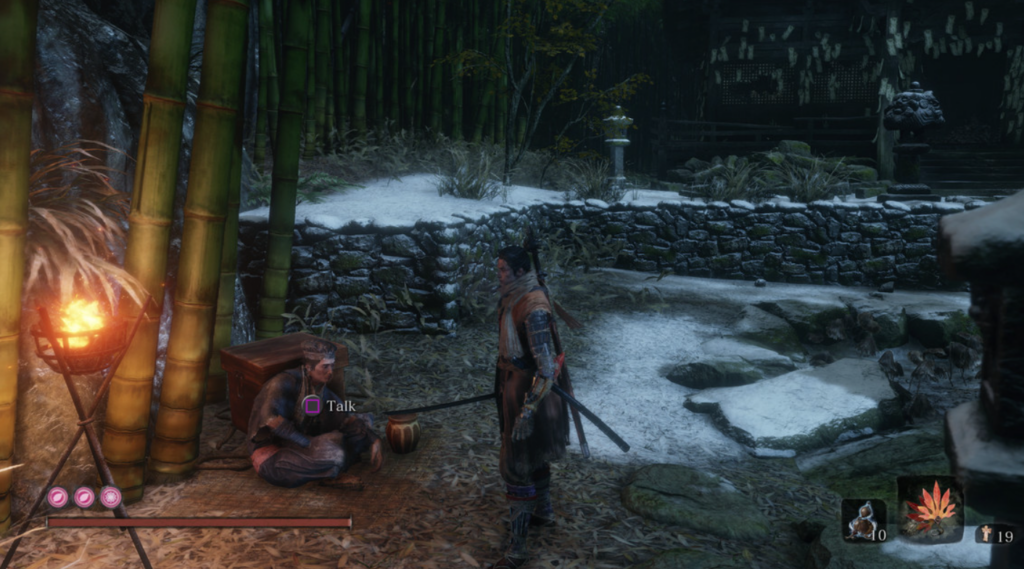 In the Dungeons of Dark Souls we had Estus Flasks as our only salvation and in the love-craftian horrors of Bloodborne we had blood vials But in Sekiro – which is Filled the brim with flying sparks and clashing steel – to deal with the cripplingly punishing enemies thrown at us, our most pertinent savior would be the “Healing gourd” which helps keep the momentum going by healing us at the direst of times, but when obtained from Kuro, it is only viable for one use and to survive in this harsh world we need all the help we can get. To upgrade the “Healing Gourd” and increase its uses we require Gourd Seeds, which can be found all over Ashina. I will provide an in-depth guide on how to retrieve the seeds and the best possible way to go about overcoming the challenges in their retrieval in chronological order.

For Gourd Seeds to increase the uses of the Healing Gourd they need to be delivered to Emma, who then upgrades it through the seeds. She can mostly be found next to the Dilapidated Temple and later on in the game near Castle – upper Tower. 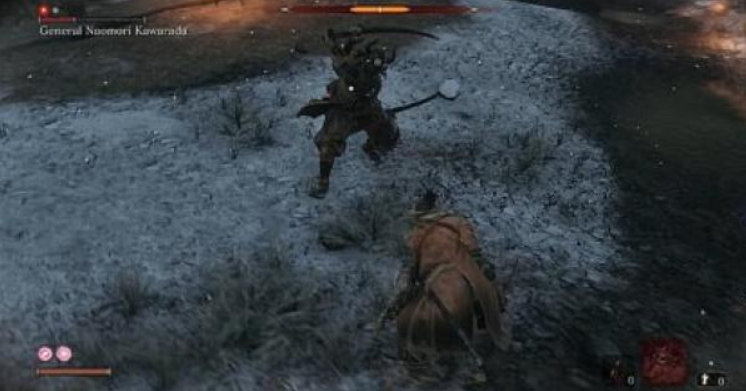 The first Gourd Seed can be retrieved by defeating General Naomori Kawarada who can be seen standing next to the wall near the gate, now I went gung ho thinking that I could take him easily but after the first few deaths I realized that stealth would be the better approach. Entering through the hole in the building, grapple the branch and try to go around from the left, once you stealthily maneuver behind him try to go for a death blow to take one of his lives making the fight significantly easier. The Gourd seed will be an item drop from the General. 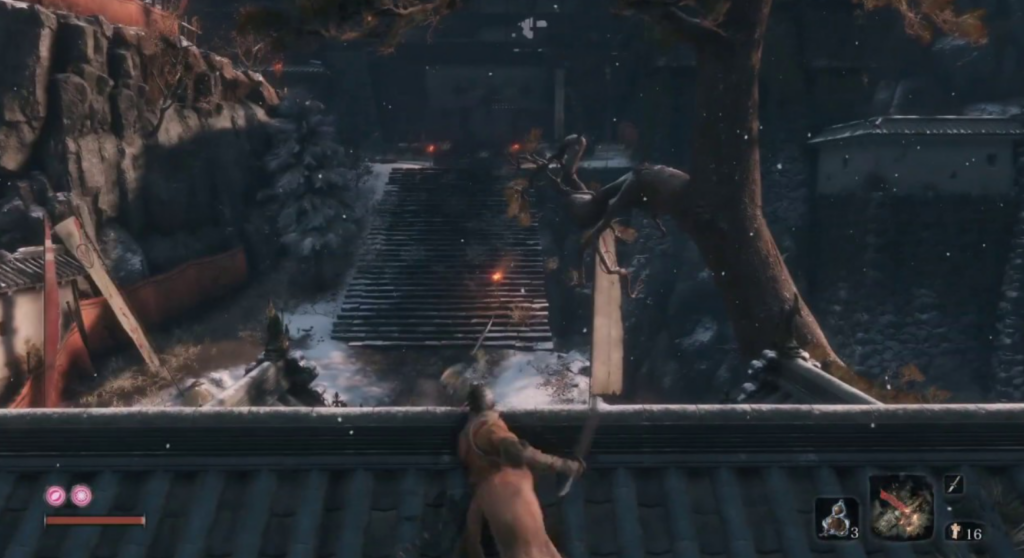 The second Gourd Seed can be found in the top opening of the building to the left but what stands between you and it is the chained ogre, the first trial of endurance. The best way to go about defeating him would be by capitalizing on his weakness to flames using the Flame vent prosthetic just be careful of his quick grabs and when he catches on fire, attack him relentlessly after that it’s easy pickings. 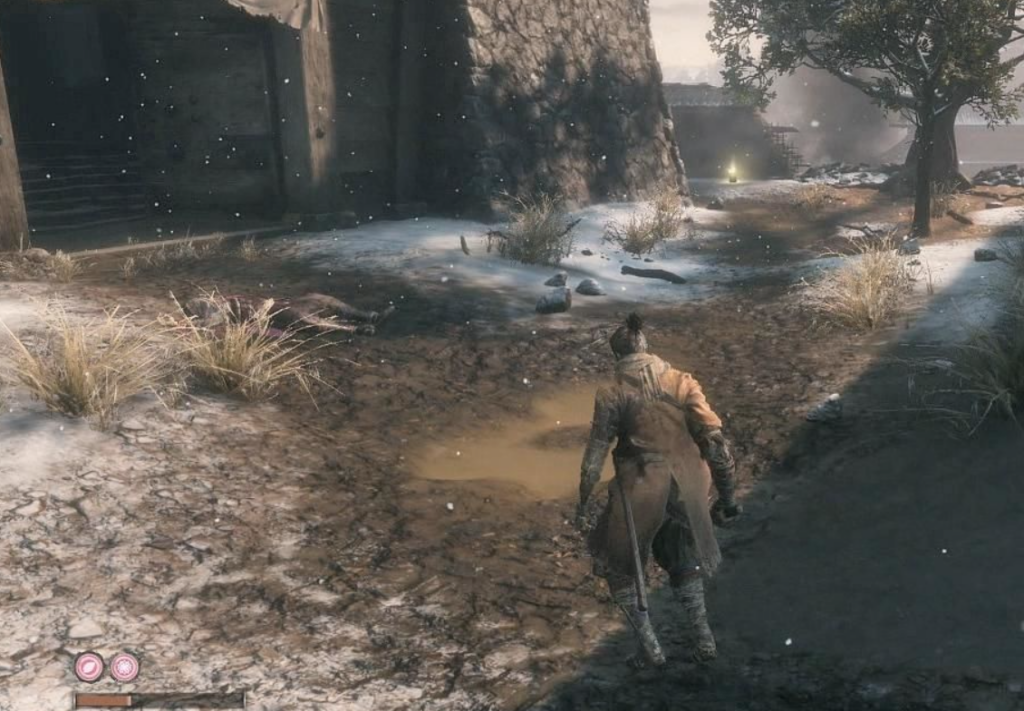 The third Gourd Seed can be found at the battlefield Memorial Mob shop following the battle with Gyoubu Oniwa (The Horse Rider). After the battle, move up the stairs which unlock after his defeat, and instead of entering the building on the right, keep to the wall while progressing towards the right side and there will be a staircase on the side of the building. Over there the Gourd Seed can be bought for 1000 sen from the Mob, fairly simple. 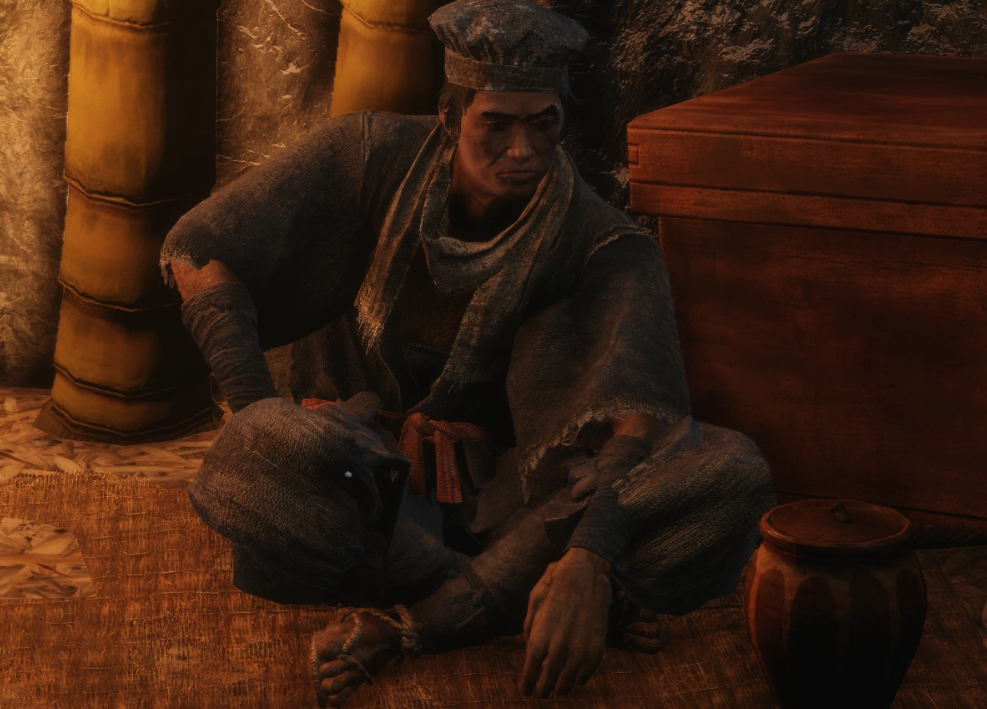 The fourth gourd seed can be bought after completing a side quest given by Fujioka the info broker who can be found in the Ashina Castle area. After defeating the miniboss at the top of the stairs, move to the right from there a person can be seen sitting on the right side inside the walls, that is Fujioka or you could do what I did and grapple to the building on the right side from the stairs, then drop down to him sidelining the mini-boss.

When spoken to, he will ask you to defeat the samurai that are after him. Finish them off and report back to him, he then leaves the Ashina Castle area and can be found near the Dilapidated Temple (he is the man next to the torch) where he will sell you the Gourd Seed for 2000 sen. 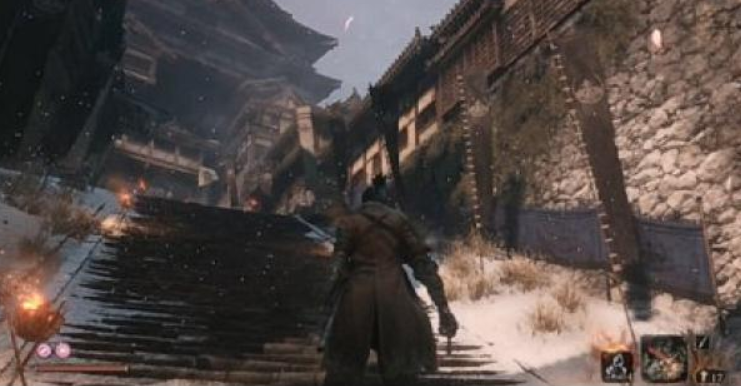 As you traverse the tower moving up from rooftop to rooftop, you will find a hook spot in a window on the left side of the large building near the top, there the Gourd Seed can be found inside the chest next to the idol just be careful of the Nightjars Aka Hawk men who I found the most troublesome enemy of all. The best way to defeat them is to stay low and be aggressive since they stagger easily and you will eventually reach the seed. 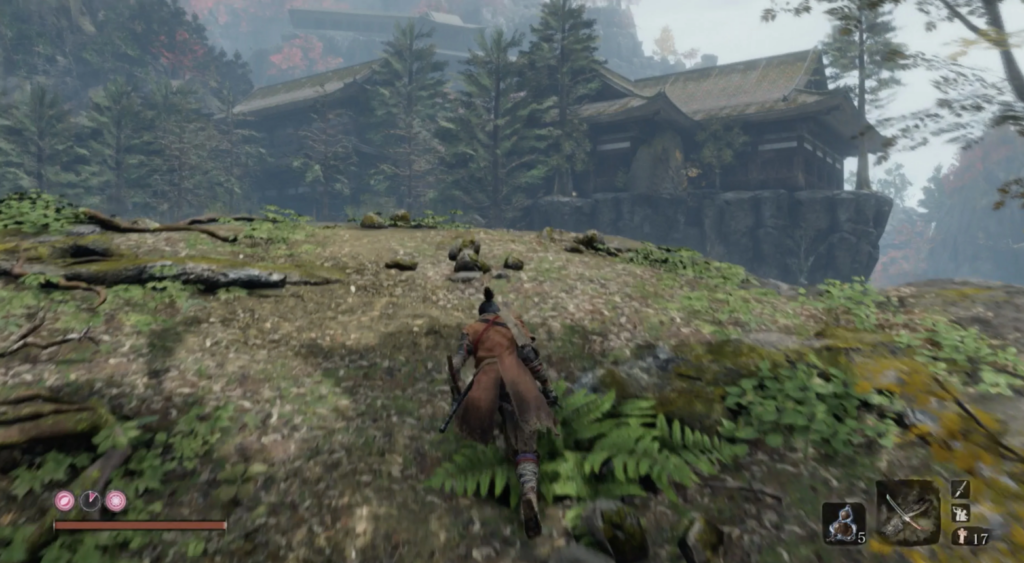 The Seed is located inside the big building. Go up the hill, past the monks to the top, I chose the stealth route after dying a few times and finally made it in. After the sculptures inside the building to the left, an opening can be seen going down, there you will see an item at the foot of an idol surrounded by enemies, that is the Gourd Seed. Now you can always face all of them showcasing your skills or just make a break for it like I did since this encounter can be rough, speaking from experience. 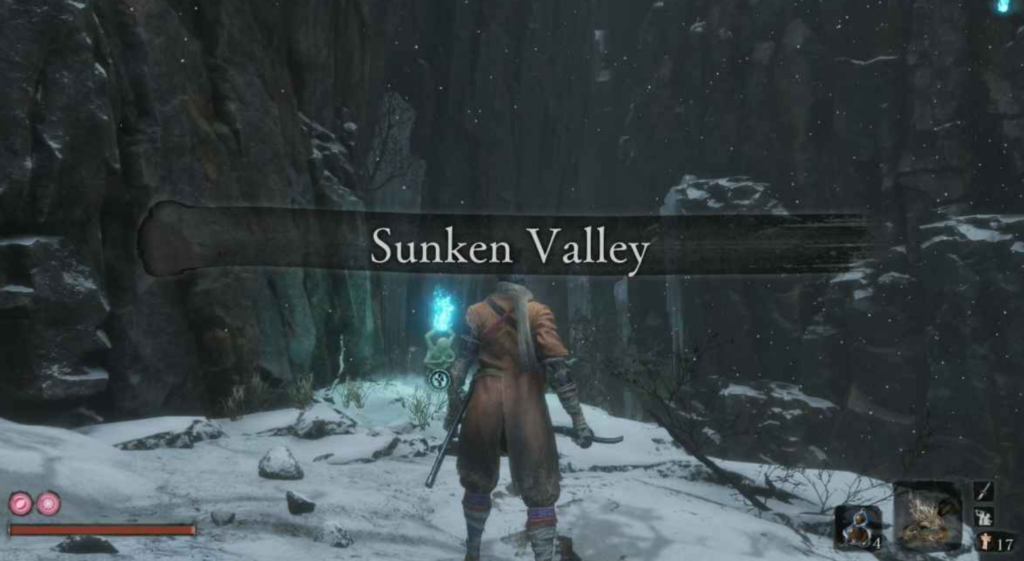 This Gourd Seed is a bit hidden and needs a level of traversal, use the riflemen as waypoints to know you’re taking the correct path. From the idol jump forward where you will find a rifleman to the ledge on the right, take him out and move along the path then grapple up to the branch, take out the other rifleman to the left. Climb the ledge on the left side and move inwards, take out the third rifleman and on the top right side there is another grapple point further across; use it and defeat the fourth and final rifleman. On the left side, lookup, there is a ledge which is easy to miss, Climb it and you will see an item under the canopy, that is the Gourd Seed.

As you traverse deeper into the depths you will find Mibu Village, I would recommend getting rid of the fog first. The seed can be located inside the village at the base of a very distinct bright tree covered with flora surrounded by enemies who are very weak but seemingly never-ending so your best bet would be to collect everything you find and move away.

The final trial of endurance by the very end of your journey requires you to traverse multiple areas and unlock a new one by completing a series of events. After defeating the Guardian Ape and the Corrupted Monk you must return to Ashina Castle but since all the idols have been locked you need to go via the Abandoned Dungeon. On the tower rooftop where you fought Genichiro Ashina, there you will find Owl, speak to him. You will need to choose how Wolf’s story will progress, by choosing the second dialogue option “Break the iron code, stay loyal to Kuro” the Fountainhead palace can be unlocked.

Defeat the main boss and return to Kuro, speak to him until all dialogue options are utilized. Then move to the Wedding Cave Door idol in the Ashina Depths, go through the opening into the small hut between the large trees in front of the waterfall where you found a story item, and pray. This will take you to the Fountain Head Palace, traverse through the area until you can reach the Palace Grounds idol on the main path, and keep an eye out for the colored carp quest, from the idol move into the building going past the squidesque nobles you will find a red chest sitting in front of your eyes, inside would be the final Gourd Seed.

Question: Where can I find Emma? She is not in the Dilapidated temple or Kuros Room.

Answer: She can be found near the Dilapidated Temple but in the last part of the game, to unlock Emma in Kuros Room defeat the main boss at the top of Ashina Castle then speak with the divine heir exhausting his dialogue, from there follow the smoke signals to talk to Ishhin, this will unlock Emma in Kuros Room. If you’re going for a different ending, without giving out many spoilers, I suggest looking at the purification route ending from the Sekiro alternate ending guide for Emma’s Locations.

Question: Can I get more Gourd Seeds from these locations in the new game +?

Answer: No, the total retrievable Gourd Seeds are 9 making the uses of the healing Gourd to 10, in the new game + instead of Gourd Seeds you will get divine grass from these locations.

Question: If I chose to “Obey the iron code” talking to Owl, can I still get the last seed?

Answer: No, this will trigger the Shura ending. You won’t be able to access the Fountainhead palace nor will you be able to give Emma any of the other Gourd Seeds in your inventory if you have any.

Question: I did not defeat general Naomori to get the gourd seed and now he’s not there?

Answer: Don’t worry, if you have progressed in the story without defeating him and he is no longer in the Outskirts wall Stairway you can still buy the Gourd Seed, it can be found in the offering box next to Hanbei and be bought for 2400 sen.