Candela Maldonado
Cande has been in the gaming industry for about 5+ years, working as a Localisation specialist for games. However, it would be her burning passion for JRPGS that would lead her to FInal Fantasy Insider. When she isn't racing chocobos, or grinding away in FFXIV, she's often playing Persona, Nier, or just about any other JRPG out there.

The Witcher 3: Wild Hunt is the decision-maker game you did not know you had signed up for. Perhaps you were just here to stick your pointy sword at some aghouls and throw a bomb or two at their nest to grab that loot – maybe even get caught in the explosion by accident, who knows.

What was just uncalled for is the game’s passion for casually slipping into a world-changing decision while I am romancing my favorite swamp witch: Keira Metz. I was just barefoot in this gorgeous cove after having my fairy tale dream night; what do you mean I have to row my way to this disgusting, cursed island?

In a Tower Full of Mice, Geralt goes to Fyke Island with the magic lamp. A powerful curse has been cast on this place, and Keira wants to lift it in her infinite kindness. Isn’t she a kind sorceress?

In this guide, I will go over the island’s lore, uncover the island’s secret loot, give you some tips on defeating the enemies, and, ultimately, how not to mess up the entire storyline by making the wrong choice.

My Bottom Line Up Front

Take a boat to Fyke Island and head to the tower. If you walk past a glowing green bubble, activate your magic lamp to gain some extra experience points. Climb up the tower, using the lamp along the way.

When you reach the top, you will see two switches on the wall (one near the stairs and the other next to the bookshelf). Use the switches to make a secret door to the lab appear, and then use your magic lantern to talk to Anabelle. Finally, take her remains to Graham.

If you’re wondering what exactly is happening with this isle and why Keira is so interested in it, look no further than this section.

Many years ago, a sorcerer named Alexander took over this island and turned it into his own personal laboratory. He studied a disease named the Catriona Plague and experimented on rats, infecting them in the process.

Alexander was buddies with Lord Vserad, who also happened to fund his research. So when Lord Vserad found out that the Nilfgaardian troops were on their way (hey, remember there was a war?), he decided not only to come over but also to invite his family over to the tower. Quite rude if you ask me, but hey, he was paying the bills. Amongst the uninvited guests was Anabelle, the gorgeous daughter of Lord Vserad.

The tower was attacked by some peasants who wanted to kill the Lord and his family. Alexander decided to give a magic potion to the Lord’s daughter for whichever reason he might have had- which may have had something to do with the L word. This potion paralyzed her and made her feel like a corpse, which allowed her to survive the onslaught. However, when her mind woke up, she could not move, and the infected rats ended up eating her. Since this tragedy, her spirit has been seen pacing the tower. A spirit which – mind you – has lost all of its beauty and grace.

So much for trying to help, Alex.

Location: On Fike Isle, south of Oreton. The quest is automatically activated after Keira Metz’s invitation.

Objective: Find out what the curse of Fyke Isle is all about.

Rewards: Depends on whether you help the ghost (300 Exp) or not (500 Exp). In addition, you will get Exp for each interaction with the magic lamp.

The main objective will be to explore the tower, but we will also take care of the second one, which consists of using the lamp to find the ghosts (without the lamp, you will see a kind of green cloud) and waiting a while to see their complete scene, receiving some experience for each one you see. So keep an eye out for the Ghost Chart to find them all.

Getting to Fyke Isle

Fyke Isle is in the southwest area of the map, as signaled by the quest marker. Exit the hut and go to Keira’s boat already indicated a little further south to get on it and continue south until you reach Fyke Isle (this way is obviously faster than swimming)

Talking to the Ghosts

When you get there, you will see that it is full of ghouls, rotfiend, and drowners, so be careful. Also, remember that the rotfiend explode, so walk away from them as soon as they are defeated.

Pay attention to the green “clouds” of light around the tower. You will see the first one near the fast travel indicator and the rest in the tower itself. Equip the lamp from the inventory wheel and use it with the item button (R1 on PS4) to have the ghosts tell you Fyke Isle’s story (and give you 50-100 Exp for each interaction). 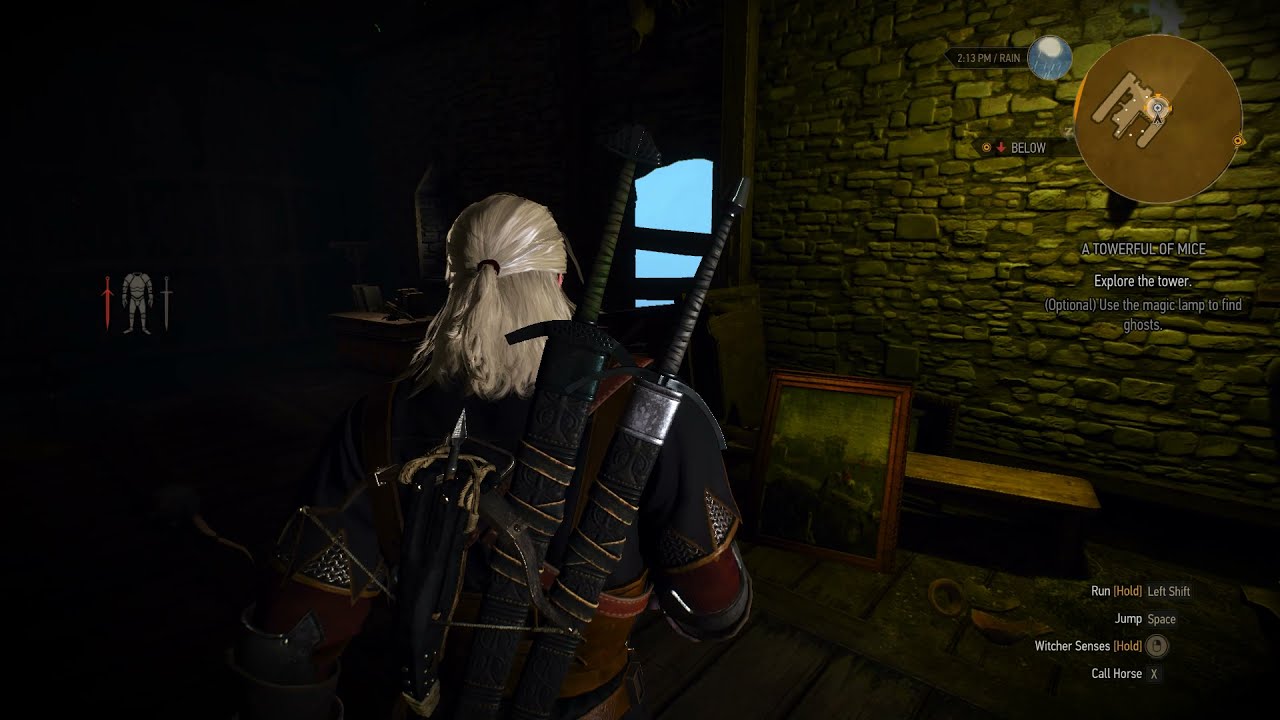 Loot the courtyard of the tower and enter whenever you want. You don’t need to investigate too much; use the lamp if you want to know what happened: the peasants attacked the tower, where some nobles were settled. However, they didn’t know that they were locked in there, investigating a disease caught by rats (the Catriona’s), which they released, spreading the plague.

When you reach the top floor, Keira will recommend you look for a secret passage. Use the sorceress’ senses, and you will soon see the lever on the wall, which will open a hidden door. 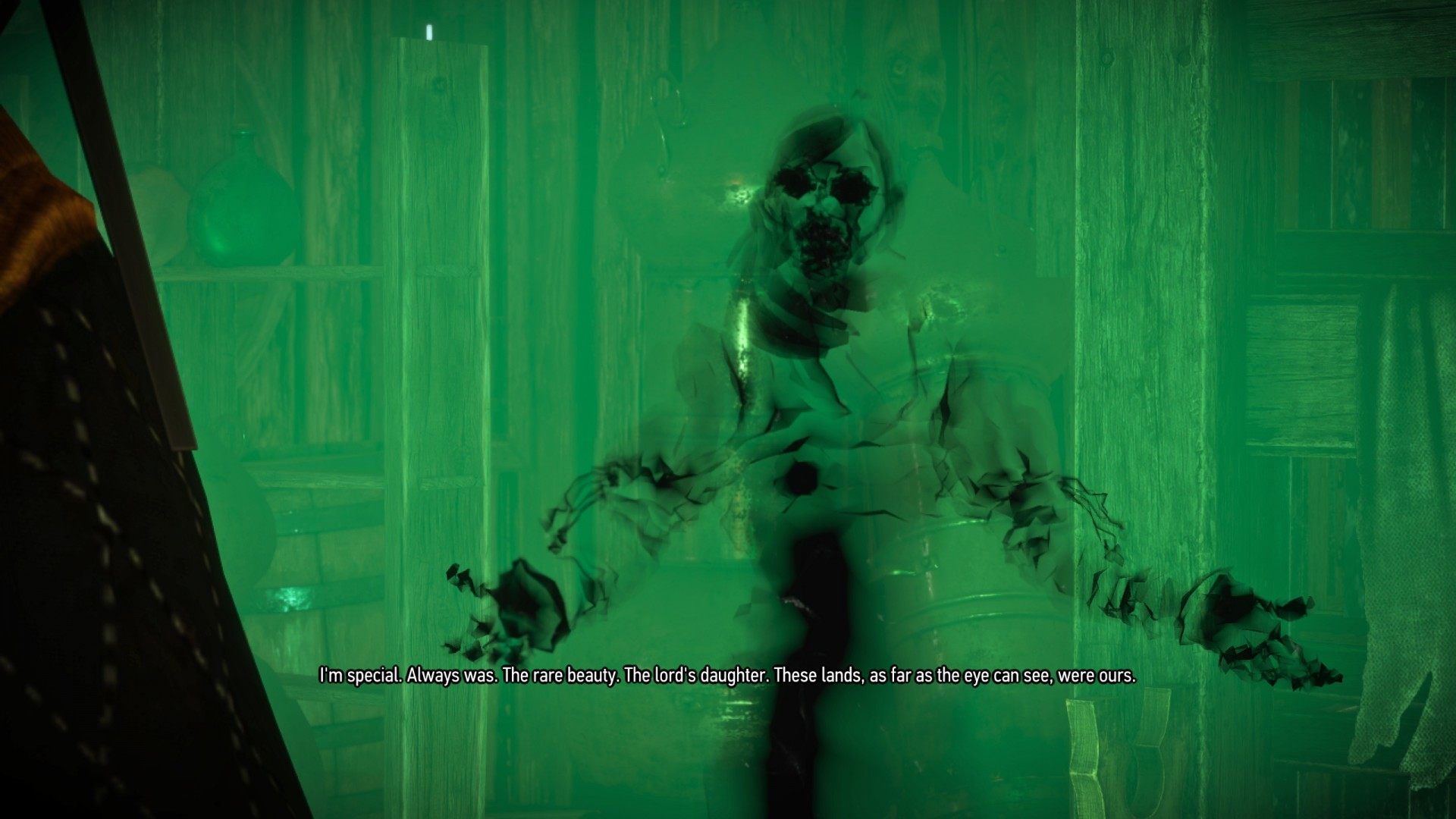 This is entirely optional, but if you keep your lamp up while you walk inside the tower instead of just taking it out when you notice a spot with talking ghosts, you’ll be able to see Anabelle before the cutscene. Likewise, when you reach the top of a set of stairs, you’ll see Anabelle’s ghost.

On the fourth floor, there are only a few beds, so go straight up to the fifth floor, and you’ll see two levers, one by the half-hidden closet and one by the railing… you have to operate the one on the railing to reveal a secret door, which leads to some stairs that take you to Alexander’s lab on the sixth floor. There you will meet the seventh and last ghost, with whom you will have a conversation, unlike the rest. You will discover that a ghost dwells in the tower, a woman who died devoured by rats… while she was conscious.

Your replies won’t affect the story at first. However, before you decide whether to help or eliminate the ghost, you should know one thing: it will impact the plot. Not a particularly serious one for you or any important character, but helping the ghost will cause Catriona’s plague to spread. You will know if you want to or not: answering “OK” means helping the ghost; the other answer will make you confront her.

As with all other The Witcher decisions, there are no right or wrong choices. Just bearable, stupidly inconvenient choices. Once you confront Anabelle, you will have to choose: to take her remains to graham or bring Graham to the tower.

There are three reasons why it’s better to bring Graham’s remains to the tower, and I will list them by relevance:

1. It gives you more experience

2. By taking her to Graham, you will spread the plague to other places in Velen and possibly the world, condemning many people to death.

3. You will ultimately bring peace to her soul.

So, ultimately, the choice is up to you. In my first playthrough, I did not take notice of the hints that both Geralt and the log provide to realize that this spirit is tricking you. If you pay attention, her story and the details provided do not add up at all. I was dumb enough to take her remains to her lover, and I regretted it immediately.

Taking the remains to Graham

If you decide to help the ghost, the decisions are pretty straightforward: you must take Anabelle’s remains and go to Graham’s house. It’s going to get messy. And gross. Not to mention the issue of spreading the plague, and the mission will end here.

Bringing Graham to the tower

If you don’t want to help her, you’ll have to deal with the ghost, Pesta.

How to Defeat Pesta

Pesta behaves no differently than any other apparition; use Yrden to slow her down and do more damage and Quen to block her attacks if you find yourself in too much of a hurry.

Once you defeat her, you must go to Oreton and talk to Graham. If you answer “Let’s go now” during the conversation, you will go straight to the tower, saving time. As for the rest, well, it’s about the get ugly. But, at least you’ll get more Exp and stop the plague from spreading.

Whatever your decision, it will end with Graham’s death. I mean, it is a high price to pay for love, sure. But also, that’s what he gets for experimenting on animals, you sick bastard.

Question: How do I start Keira Matz questline?

Answer: Keira Matz’s questline is 100% worth your time. Her questline starts with “The Magic Lamp,” after finishing the main quest, “Wandering in the Dark.” Completing it will lead you to “Keira Matz’s Invitation,” where you can meet the witch, learn more about the magic lamp and agree to help her with the curse that lies over Fyke Island.
Just keep in mind that you’ll have to do all of this before “The Isle of Mists,” or your quest will fail, and you won’t be able to access this questline. But, overall, it’s a pretty cool questline with extraordinary events and memorable gameplay moments – don’t pass it up!

Question: Where are the ghosts in a Towerful of Mice?

Answer: For a quest with the word mice in its name, there sure seems to be a lot of talk about ghosts here. You are not meant to defeat them but to hear them out. If you equip and use your magic lamp near the green bubbles in the isle, you’ll be able to hear them and get some EXP.

Question: How to have a romance with Keira?

Answer: To have a relationship with Keira Metz, we will have to complete the following side quests: The magic lamp; an invitation from Keira Metz; A tower full of mice; A favor for a friend; and finally, For the advancement of learning.

A Towerful of Mice is a wildly fascinating side quest that will have you rowing to an island, fighting a bunch of demons, and uncovering an enthralling story of love and death. The emphasis is that this is missable, optional, and secondary content that can enrich and change the world and visuals around you.

This quest is a prime example of how The Witcher 3 sets the bar for other upcoming RPGs and lets them know, hey, instead of doing another repetitive, meaningless fetch quest, why don’t you create something that integrates into the story and adds to the game’s world-building?

From a gameplay experience, it represents the first time you’ll come across a big, game-changing decision from content that you just expected to be, you know, your everyday side quest. But, story-wise, it teaches a big The Witcher lesson: spirits lie, don’t trust them. Trust your character log instead.