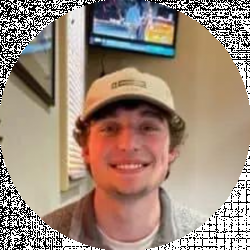 Sean OBrien
Sean has been playing video games ever since he was a little kid, with devices like the Nintendo DS, Wii, and Gameboy Advance jump-starting his love for video games as a whole. Today, his favorite games include all of the Soulsborne titles, the Last of Us franchise, Cuphead, Hollow Knight, and many more. His favorite genre is a toss-up between Action RPGs and story-driven games, but he is open to playing any game that catches his eye. The game that truly made Sean fall in love with video games was Bloodborne, as he had never experienced a feeling quite like the one Yharnam had on him. Sean is relatively new to writing, but hopes that everyone can gain something from whatever he puts out for the reader.

Death is something that players have gotten accustomed to in Fromsoftware games, and many of us welcome the idea of learning from these deaths. Across the many different titles that they have released, dying repeatedly is something to be expected. These deaths are frustrating and demoralizing, and it can be hard to find the silver lining in each fatality.

In Sekiro, there is no doubt in my mind that everyone will die multiple times across all playthroughs. With these deaths, players will also become familiar with the resurrection system that this game has added to its combat system. Getting another chance to battle with a boss who just took you down without having to restart the whole encounter is something that all players will take advantage of. However, in Sekiro, your deaths and resurrection actually hold significant weight within the world of Ashina, and dying too many times can affect rewards and even some side-character story progression. This issue is thanks to the plague that curses the people of Ashina, known as Dragonrot. 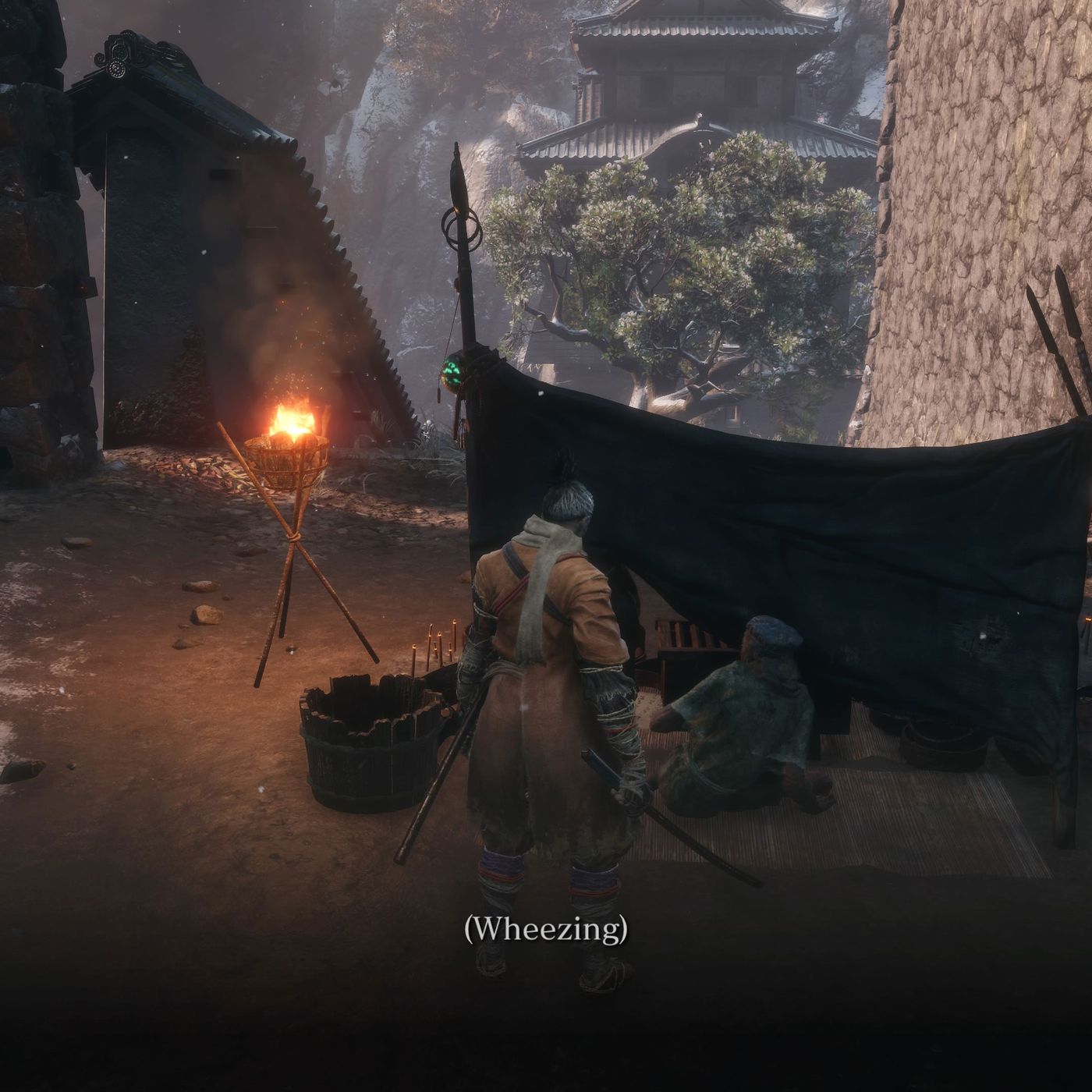 Dragonrot is an ancient disease that can affect friendly NPCs throughout the game, halting the progression of some of their quest lines until the Dragonrot is healed. The concept behind Dragonrot serves as a reminder of all the times you have attempted and failed and adds a feeling of your deaths becoming more and more significant. After dying, you may notice a prompt pop up on the screen known as rot essence. These rot essences will be tied to certain characters, meaning that they are afflicted with the rot. Trying to talk to them will result in a cough-ridden conversation, and you will not be able to speak to them apart from listening to their cough.

These people in the world are suffering from your mistakes because the Wolf has the dragon’s blood within him. The dragon’s blood gives Sekiro the ability to resurrect in battle, giving you another chance to tackle a problematic enemy or boss. While this may seem like a significant bonus, and it is, there are some significant drawbacks for those who care about potential story implications. However, every time Sekiro dies, the life within these helpful characters becomes drained, and the disease begins to set in.

Characters across the map will begin to cough, and approaching them will let you know exactly what state they are in currently. Many will be on the ground and unable to communicate appropriately. This dilemma cuts off any dialogue they had preloaded, and some of these interactions are essential in completing side quests. You could ignore these Rot essences and continue to fight, brute-forcing your way through the game. However, your world will begin to feel lifeless, as once talkative and helpful NPCs will be dying in front of you. Once friendly NPCs become sick, you will need a specific item to alleviate the Dragonrot.

The item you will need is a Dragonsblood droplet, and they are spread across the map. There are 15 Dragonsblood droplets in each playthrough of Sekiro, and they can either be found, purchased, or earned. You can buy a few from the merchants you will meet along the way and others scavenged during your adventures. Below, I will briefly go over where to find these items. 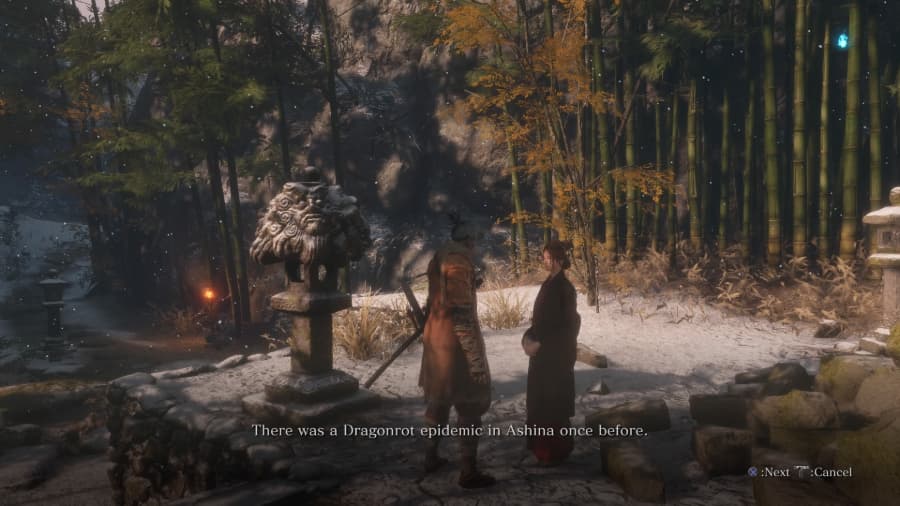 Sometimes, these merchants can refresh their stock of Dragonsblood droplets, but they can each only sell a certain amount per playthrough. To get these specific merchants to restock is to use one of the Dragonsblood droplets at the Sculptors Idol, removing a rot essence. This action will allow these vendors to sell you another droplet, allowing for a convenient option in ridding Ashina of Dragonrot.

Aside from the vendors, these droplets can be sparingly found within the world, requiring you to dig deep in your exploration. After your first droplet is given to you by Emma, you will be on your own to find the rest. The locations of the Dragonsblood Droplets will be listed below: 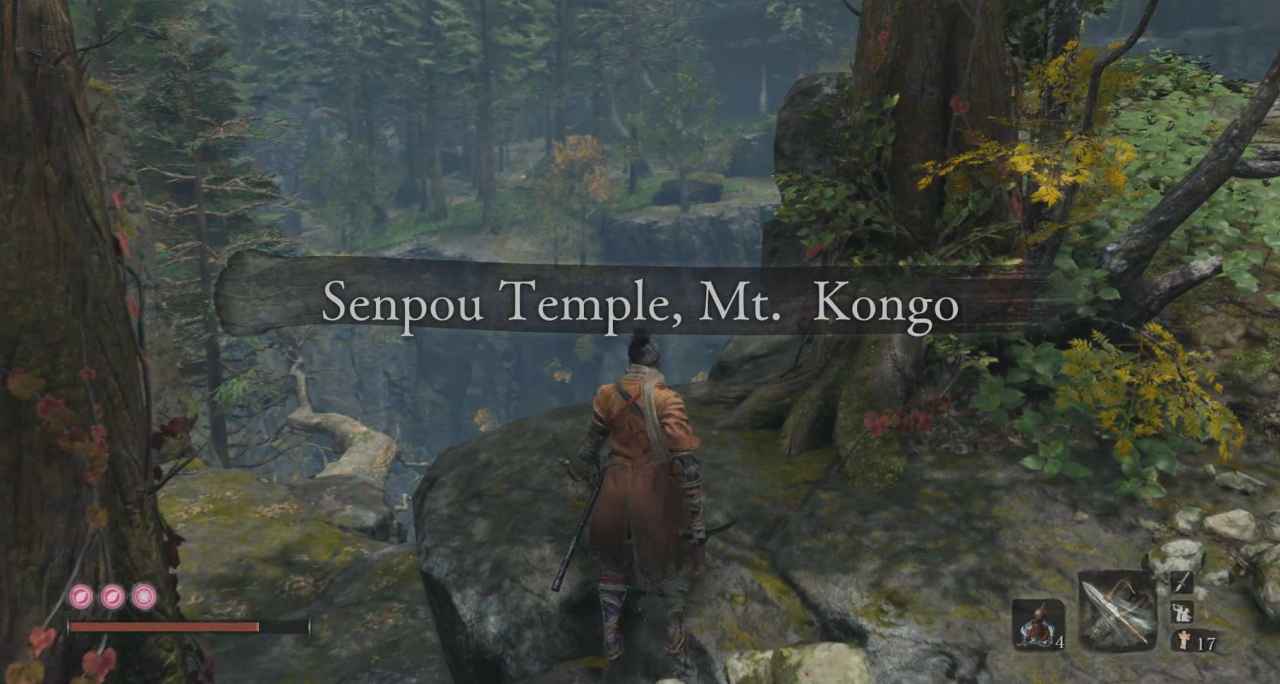 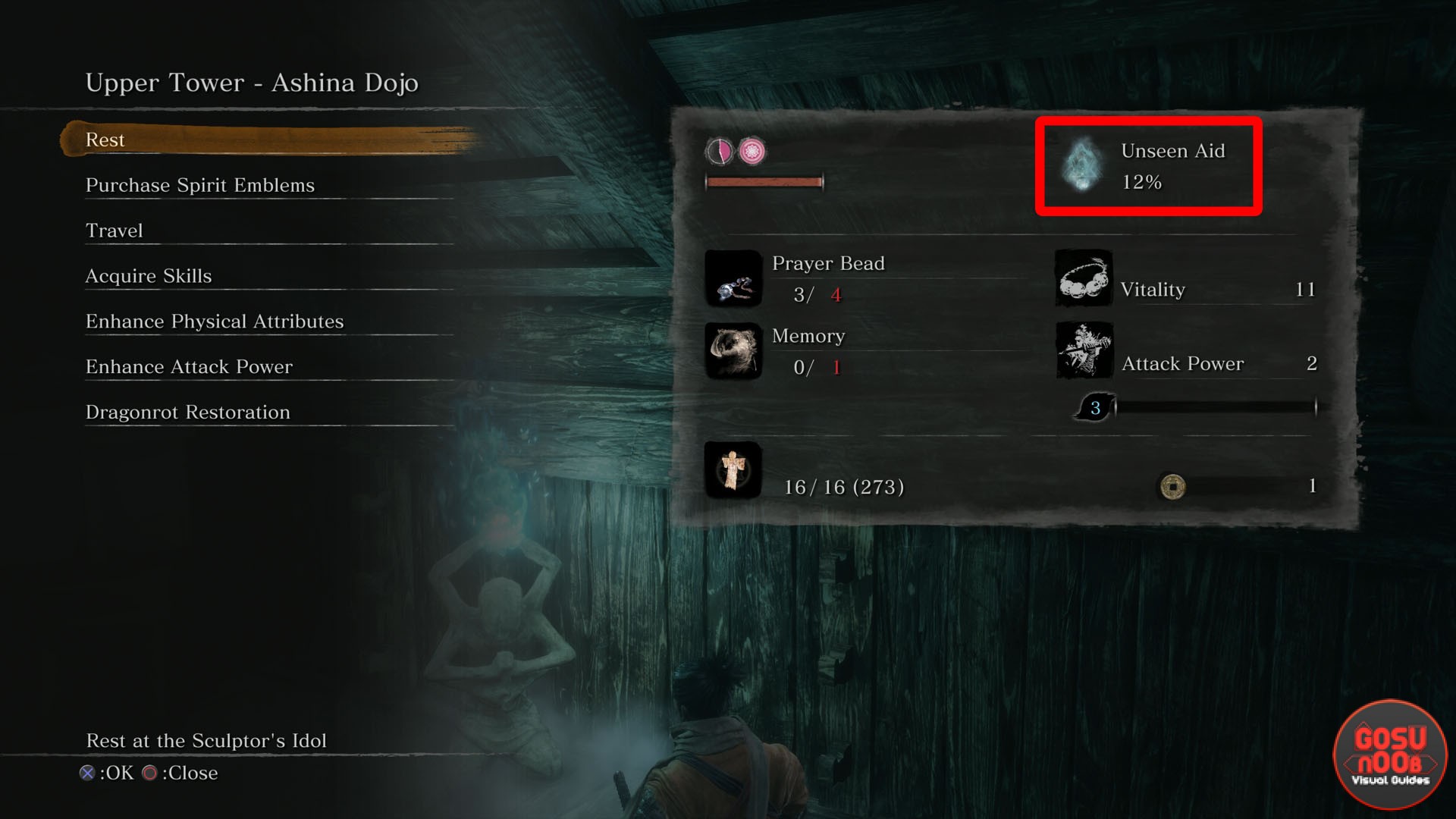 Death in Sekiro will result in losing half of your earned XP with each fatality, which can become immensely annoying when trying to level up skill points. A mechanic can alleviate this burden called Unseen Aid, and it ties directly into Dragonrot. Unseen Aid is a mechanic that offers players a percent chance (30% max) to be able to retain their XP upon death. The player has no choice in regards to when they get to use this mechanic, and instead are going to have to rely on the percentage they are at and hope that they are blessed.

As I mentioned above, the max and base percentage for Unseen Aid is 30%. You will start at this number, and once you are given a rot essence item, the percentage will drop down to 15%. Every subsequent rot essence you receive can drop Unseen Aid down by 2%, and the lowest percentage of Unseen Aid you can hit is 3%. Using a Dragonsblood droplet will fully alleviate all NPCs from Dragonrot, so you do not have to worry about addressing individual rot essences.

The percentage discussed above relates to your chance of receiving Unseen Aid upon death. You do not get to pick and choose when you get this benefit, as I mentioned above. The only way to increase your chances is to use these Dragonsblood Droplets to rid Ashina of the rot essence. You will know that you have received the Unseen Aid when you respawn at your respective Sculptors Idol, as you will be greeted with some blue characters appearing on screen. Below this, the words ‘Unseen Aid’ is displayed, and a heartwarming sound effect will play.

In my personal opinion, the amount of times you benefit from Unseen Aid when the percentage is at 30% is surprisingly frequent. Before I fully knew what Dragonrot was and how to deal with it, I ignored it. Thirty percent did not seem like a significant number, to begin with, so 15 percent did not feel much different to me. However, suppose you are constantly running on 15 percent Unseen Aid. In that case, it feels as though you never get the benefit and always the punishment.

The extra 15 percent gained from using a Dragonsblood droplet, in my opinion, is one of the most important things you can do in your playthrough. Deaths in Sekiro will stack up quickly, and losing half of your XP every time can be difficult and discouraging after subsequent fatalities. Ensuring that you have the best chance to receive any benefit upon death should be significantly cherished. By adequately managing Unseen Aid, the player will be able to save up countless amounts of XP points, allowing for the unlocking of all of the skills within the skill trees. 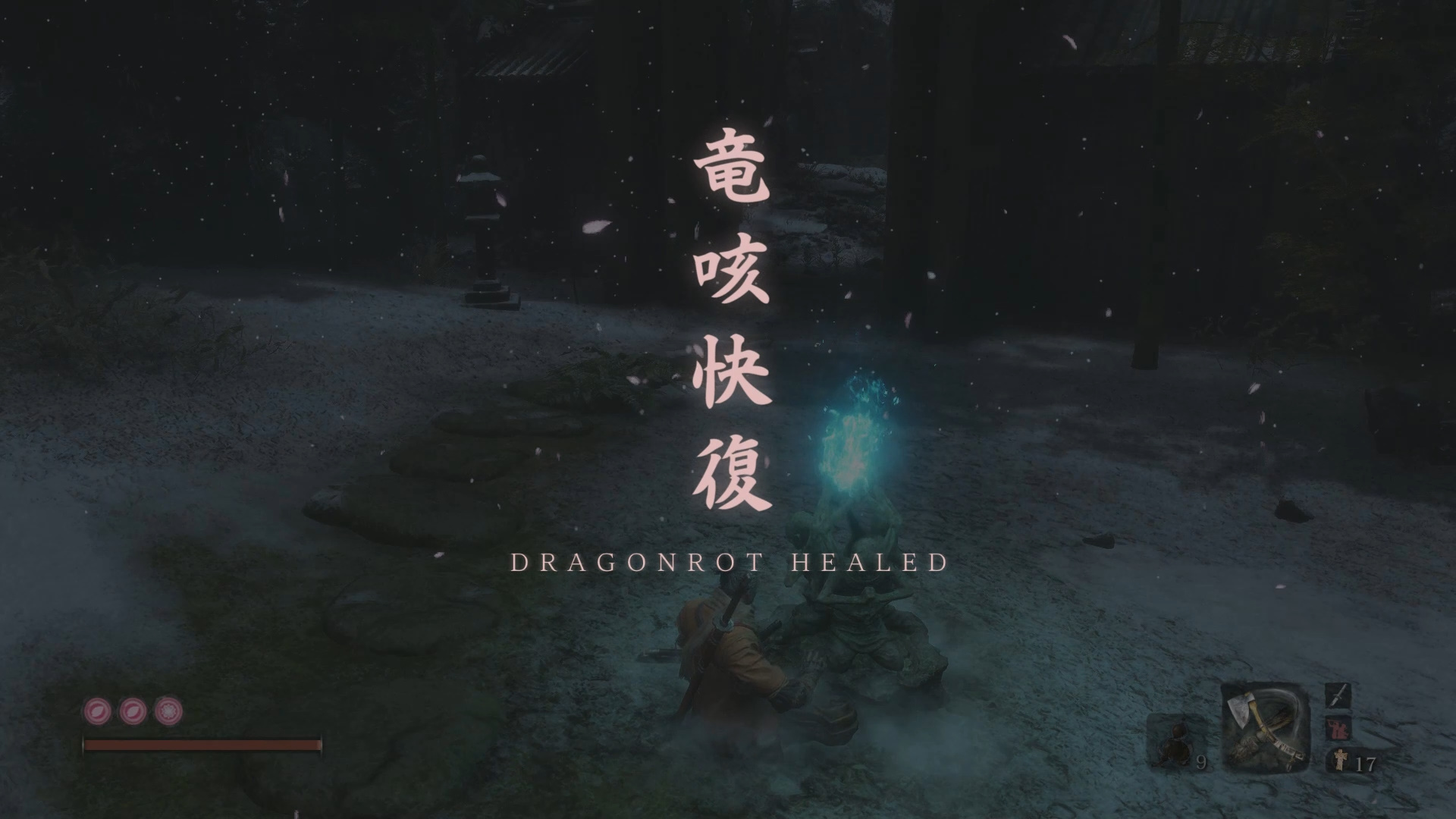 There has been debate in the community about the relevance of the punishments of Dragonrot within the game and that it seems pointless. I see why people think this, as Sekiro is already immensely difficult and punishing alone. However, I feel confident that Dragonrot is there to serve a greater purpose. In Fromsoftware games, deaths are punishing and frustrating, and for most of us, inevitable. Still, aside from losing souls and progress in a boss fight/area, nothing really comes from your constant fatalities. Dragonrot, in my opinion, attempts to counter this by adding significant weight to every death.

People in the world around you are suffering due to your mistakes, and you know that you are no closer to killing that boss standing in your way. The feeling of dread after a demoralizing death only piles on more when you are greeted with a Rot Essence item at the moment you respawn. If the player truly buys into the story of this game, this mechanic can push you to be better. It creates a certain feeling that something important is on the line with each attempt. Knowing that death is that much more punishing, players will be motivated to rise to the occasion.

Sekiro offers some of the tensest, high-octane moments of combat that any game has to offer. This action will obviously result in many deaths stacking up for you as you study enemy movement patterns and begin to formulate a strategy. Death is a familiar but despised aspect of one’s journey through Ashina, and avoiding it will be a near-impossible task. Dragonrot and Unseen Aid serve as ways to make these deaths weigh more heavily on the player while at the same time rewarding those that can understand game mechanics. While you are told through dialogue precisely what to do with Dragonrot and what Unseen Aid is, these concepts can still be confusing for new players to grasp. You must quickly learn to manage Dragonrot within your game. This knowledge of how to manage and cure Dragonrot may not seem all that important, but later on, you will recognize its significance in your playthrough.

Any mechanic that can nullify some of the painful parts of dying in Sekiro is welcomed in my book, as I know how much dedication the grind to maxing your levels really takes. It is such a great feeling when you respawn after a brutal death in a high-stakes battle, just to be rewarded with all that hard-earned XP that you assumed was gone. While I see that it can fluster newer players with an added layer of punishment to your deaths, I choose to look at the bright side. I feel as though this mechanic was just another exciting idea that FromSoftware successfully intertwined into their gameplay. After all, I would rather a developer experiment with a mechanic like this instead of simply pushing out the same product repeatedly.

Question: If I haven’t interacted with an NPC, can they still get Dragonrot?

Answer: Yes, anyone within the world can be given Dragonrot due to your death, which can be stressful for those who care about story implications.

Question: Can Anyone Die from Dragonrot?

Answer: No, thankfully, no NPC will actually die from Dragonrot. However, the halting of their questline and constant coughing will eliminate them from the story, removing their quest lines until their sickness is fixed.

Question: Will the endings be affected if NPCs have Dragonrot when I finish the game?

Answer: No, while Dragonrot will eliminate many of the side quests and storylines associated with some NPCs, the primary endings will not be affected by the presence of Dragonrot in the world.